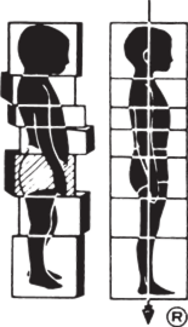 The Rolf Institute® logo depicts a small boy's body before and after Rolfing®. It tells the story of a real child whose mother made a life changing decision about the future of his health. Four year old Tim Barrett was diagnosed with Leggs-Perthes disease in 1959. Tim's mother was advised by doctors to put him into a cast for five years. It was predicted Tim would be in a wheelchair by the age of 20.

Dr. Ida Rolf believed she could help Tim without having him put into a cast. She worked with him for several months and Tim grew up without any handicaps. A surfer since the age of nine, today he is an active 52 yr. old outdoorsman, living with his wife and two children in Hawaii.

The subject for the logo, Tim Barrett, spoke for the first time about his experience with Rolfing® Structural Integration at the 100th anniversary celebration of Dr. Rolf's birthday on May 19th, 1996 at the Rolf institute, in Boulder, CO. 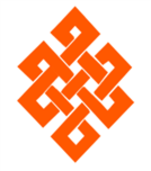